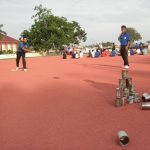 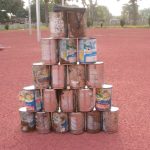 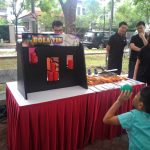 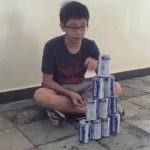 In Malay, "bola" means "ball". Basically, it is a game using a ball to knock down a stack of tins that are arranged in a pyramid.

1. Empty tins of similar size are stacked up to form a pyramid.

2. Players are divided into two teams, e.g. A & B teams. The teams decide which team destroys the pyramid and which to rebuild it.

3. A line is drawn about 10 steps away from the pyramid. Assuming Team A destroys and Team B rebuilds, members of Team A will position themselves behind this line to begin their throws. Team B stands anywhere behind the tin pyramid.

4. Using a ball, each member of Team A is allowed two throws to destroy the tin pyramid. If he fails, the next member of the team gets into position to throw.

6. If the pyramid is completed before all the members of Team B are knocked out, Team B wins and the teams change sides.

However, if players of Team B are knocked out before the tin pyramid is completed, Team A wins and the game starts all over again.