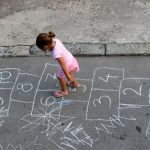 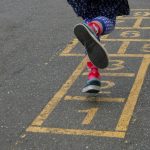 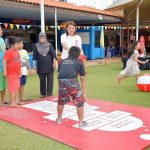 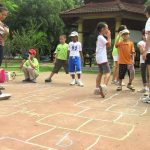 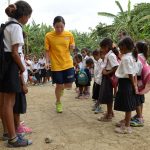 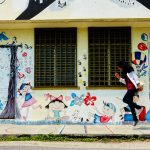 Use chalk to draw a hopscotch pattern on the ground or use masking tape on the floor.

Create a diagram with eight sections and number them.

Each player has a marker such as a stone, bottlecap, shell, button, etc.

For younger children simply hopping across the single versus double squares can provide hours of fun.

The first player stands behind the starting line to toss his or her marker in square one.

Hop over square one to square two and then continue hopping to square eight, turn around, and hop back again.

Pause in square two to pick up the marker, hop in square one, and out.

Then continue by tossing the stone in square two.

All hopping is done on one foot unless the hopscotch design is such that two squares are side-by-side.

Then two feet can be placed down with one in each square.

A player must always hop over any square where a maker has been placed.

Getting out: A player is out if the marker fails to land in the proper square, the hopper steps on a line, the hopper loses balance when bending over to pick up the marker and puts a second hand or foot down, the hopper goes into a square where a marker is, or if a player puts two feet down in a single box.

The player puts the marker in the square where he or she will resume playing on the next turn, and the next player begins.