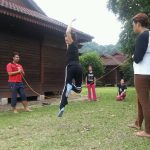 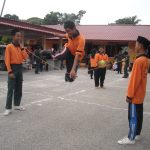 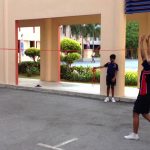 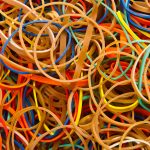 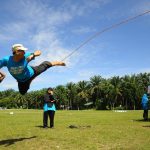 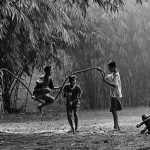 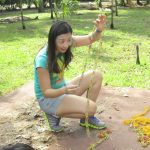 Zeropoint or "yay-yay" is one of my favourite childhood games. We didn't have computers then so we spent a lot of time making up games with our friends. The good thing is that we often made up rules which would suit ourselves. The bad thing were that our opponents could make up their own rules as well!

To play zeropoint, we first need a "yay-yay" or a rubber rope. To make one, you need to collect as many rubber bands as possible. Sometimes you can buy a whole packet of them in the shops.

Once you have your rubber bands, link them together as shown in the photo. Continue doing this untill you have a long rope. Some people make a double-stranded rubber rope. This rope usually lasts longer but is less springy.

Now that you have made your "yay-yay", you can start gathering friends to play zeropoint. You will need at least 4 people to play. They will be divided into 2 teams. Let's just call them team A and team B. If team A goes first, team B holds the two ends of the "yay-yay". It should be fairly tight so that the rope doesn't sag.

Members of Team A take turns to jump across the rope. When they cross level 1 (the rope is on the floor), they should yell "zeropoint!" When they have completed jumping across all the levels and start over, they yell "one point". At each level, the rope gets higher and higher.

At the levels 1 and 2, one has to jump over the rope without touching. But from level 3 onwards, one can touch the rope.

In the end, the team with the most number of points wins.